There Is A War 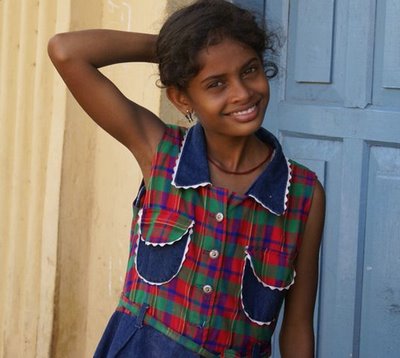 “There is a war,” a colleague said to me when I told her that I was going to Trincomalee on Saturday as if she was referring to a distant land on another part of the world . “Be Careful,” “Be Informative,” another one typed on the skype.

Since I arrived in Sri Lanka about two weeks ago, I have rarely read news. There is no access to radio or television. Sarvodaya headquarters in Moratuwa (20 KM South of Colombo) feels like a peaceful oasis. Even the South that I have traveled betrayed no sign of the war.

Last year, along the coastal areas of the Sri Lanka one could see the tents and temporary shelters that tsunami survivors were residing. These days, it is difficult to find the marks of the tsunami along the Galle road. If one didn’t know that tsunami had struck here only two years ago, it would be easy not to notice that thousands lost their lives in homes, in buses, in trains and in temples.

I was going to Trincomalee, to the East, to see some of the refugee camps. Since the conflict escalated early this year, over 100,000 people have been displaced.

Humaira and her husband Arham were to accompany me. We had left Colombo by 5 AM as it was supposed to be one day trip. It was still dark but people were already on the street, Buddhist temples had been blasting prayers all night and Perehera (religious processions) were on progress in celebration of rainy season.

Half way to Trincomalee, the signs of war began to appear. One after another there were security check posts. We crossed a dozen or so of these hurdles but only stopped at four. We were driving in Sarvodaya vehicle. Only in one did I have to show my identification card – I pulled my Wisconsin driving license. Usually, Humaira’s Sarvodaya identity card was enough.

In every 100 to 200 meters there was at least one security person standing along the highway. Some were on bicycles, with their automatic guns on their shoulders, some on vehicles and many standing on alert.

It was six hours drive to Trincomalee. As we entered the town, the huge billboards that decorate Sri Lankan highways suddenly changed into Tamil from Sinhala. As if to signify, we are entering the land of different language, culture and religion. The town itself is not too dominated by Tamil. I am told it’s evenly divided into Tamil, Sinhala and Muslim. It is one of the most ethnically mixed towns in Sri Lanka.

Town itself was on full alert. There were security forces on every corner.

After visiting Sarvodaya district center, we proceeded to a refugee camps.

Finally, I saw war. Not in the sounds of falling bombs or gunfire but in the voices of people, in suffering of old, young and children, who had fled their homes to survive the war.

There more were than 200 people in community center that was not bigger than 120*70 feet. Some were sleeping, others chatting, cooking, or just worried about their future. Most of them were Tamils who had fled their villages as the government put up fierce attacks to retake Sampur, a strategic area, on the other side of Trincomalee harbor.

People have been living in these camps for more than six months. I met a young farmer who worried about the future of his children, he said, “I wasn’t educated but I was hoping to get my children some education so they don’t have to live hard life. But, I don’t know what to do anymore.” A woman fought tears as we spoke. As the bombs began to fell in Sampur area she ran with her children to catch the last bus. Her fisherman husband had been on the sea that day. Now, she doesn’t know what happened to her husband.

The most striking person I met was an old lady. She spoke very good English and said she was a Sinhalese but had married to a Tamil man. They were living in LTTE controlled area for years. “Government forces come and tell me that even though I am Sinhala I am supporting terrorist,” she said. “We are just simple people, we don’t support terrorists” She added. “We want peace.”

Many related the story of fleeing the bombs as it fell on their villages, sometimes pointing to their legs, signaling how close it had fallen. Many were critical of government but I sensed they were not as open in criticizing the LTTE. It was not the support they had for the rebels but seemed more of an apprehensive. Later, I asked with Humaira. She narrated a story of LTTE “spies” infiltrating these camps. One of those in Jaffna she said, even knew about her wedding day, while her colleagues in Sarvodaya hadn’t known.

A few years ago in Trincomalee, one would have seen tourists all over the town. The town boasts some of the most beautiful beaches in Sri Lanka. These days tourists hardly venture this far to the east.

It was a short trip for us. We left the town by 4PM, while there was enough light while we cross the Habarana forest. Despite a heavy downpour on the way back, we were safely back home before mid-night.

I just read on BBC that there had been a major suicide attack by LTTE on convoy of Sri Lanka navy in Habarana. Over 90 people have been killed. The attack was on the same road, I had traveled two days before.

As I read these, I cannot forget the faces of people I met in Trincomalee. Today, tonight, and tomorrow, many will flee their homes to find safety in Trinco, Batticaoloa and India.

Yes, There is a war.

gunsforsale said…
Thanks for sharing the best information and suggestions, it is very nice and very useful to us. I appreciate the work that you have shared in this post. Keep sharing these types of articles here.
Full Automatic Guns For Sale

Guns for sale said…
Isn’t it entertaining if we always talk about topics like that..

Anonymous said…
From worldwide roulette choices to localized slots and table games, every mobile on line casino we recommend will let you deposit, play and win in your native forex. Moreover, as long as|so lengthy as} online gaming is permitted in your country, you'll be able to|you'll|you can} go to your local app store and obtain every platform without any issues. Regardless of where may be} on the planet, mobile on line casino apps are a major half of} the iGaming landscape. As lengthy as online gambling is a reputable, dependable and respected trade in your 1xbet korea country you then'll have entry to mobile games. From free play on line casino games to actual cash gaming and live dealer tables, the selection of mobile on line casino games you'll discover at our associate websites is enough to|is adequate to} bring the brilliant lights of Las Vegas to the palm of your hand .
Tuesday, December 06, 2022 10:03:00 AM